Wired vs Wireless Security Cameras, Which ONE is Best to buy? 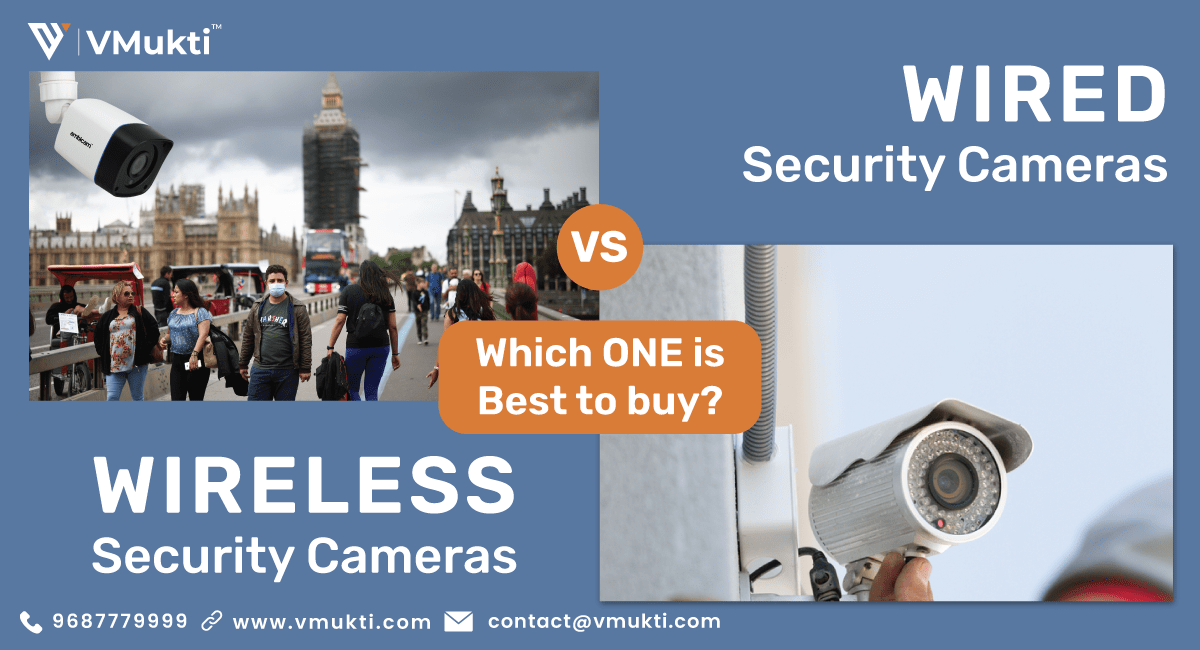 Wired vs Wireless Security Cameras, Which One is Best to buy?

Let us look at both of these systems individually and then compare them across a few simple metrics:

A wired camera security system is one which is physically connected with your house through the power source and the ethernet cable.

Its basic features are:

a. It utilises a hardware-based internet connection, for eg. via an ethernet cable;
b. It can either utilise an electrical power source or the Power of Ethernet (PoE);
c. It can do both: provide a live feed and store the feed in a remote storage space;
d. Its storage space is located in a physical hub in or around the house;
e. It cannot be wirelessly hacked by potential bad actors;
f. Since a wired camera security system requires basic integration with hardware and physical manipulation of space, it usually costs more to acquire and install in comparison with a wireless security camera system.

A wired camera system is more likely to provide you with clear and stable audio and/or video feeds since wired internet access is inherently less prone to outage. Moreover, a wired camera system can also be remotely accessed if necessary with the right support. However, a wired system requires a consistent power source and is therefore not advisable for locations which face frequent outages and do not have secondary sources of power.

A Wireless Security Cameras system is one which is not physically connected with your house, and operates through rechargeable or replaceable battery power.

Its basic features include:

a. It utilises either a local storage space (in the form of a chip) or a cloud-based storage;
b. It provides more mobility to the users since individual cameras can be easily moved without hassle;
c. It can accommodate more cameras as and when required by the circumstances;
d. It cannot be affected by issues such as its wires being cut off during instances of theft since there are no wires in the first place;
e. Its signal range is limited by the Wifi network to which it is connected;
f. Since a wireless system can be acquired in pieces one at a time, and does not require any initial installation cost as compared to a wired set up, it is also likely to be lighter on your pocket.

Additionally, a wireless system is obviously easier to install and operate since it does not require hardware configuration. However, a wireless system is potentially more prone to being hacked via the network to which it is connected. On the other hand, the wireless system will not be affected by power outages as you simply have to replace or recharge its batteries.

Now that we have looked at the basic features of both the systems, let us compare them across a few important metrics:

Wired security camera systems require a proper and supervised installation since the system must be integrated with the power sources and the network source. This has to be done through wires or power cords, and might even include basic drilling and so on. Therefore, integrating the hardware of the wired system might prove too tedious for some business or homeowners.

In this respect, a wireless system is much easier to set up and operationalise. At best, it might require some technical support insofar as the software installation is concerned. With innovation in technology, even this aspect of installing wireless cameras is being simplified further.

Reliability means consistent delivery of feed over the longer term. According to this metric, wired security camera systems potentially provide more reliability in terms of its connection and delivery of audio/video feed since it is directly connected to the internet via an ethernet cable. This means that the wired system will be as resolute as the rest of your appliances when it comes to outages.

On the other hand, a wireless system usually utilises the Wifi connectivity of the house, which as any internet user will tell you, may slow down due to glitches or maintenance issues from time to time. Therefore, wireless systems are recommended only when fast and stable Wifi connection is a certainty.

3. Purpose of the System

The wired and the Wireless Security Cameras systems also have radically different fields of application. The wired system is ideal for business or home owners who want a permanent solution across an established and relatively stable fixture.

On the other hand, for renters or frequent movers, the wireless system allows for more flexibility and mobility. Moreover, the hassle of installation might not be worth the effort for those looking for a short term solution, whereas for fixed property owners, a wired system is an easy investment in the long term.

Regardless of whether you own your house or are renting it on the short term, the supply of power is an important and independent factor which determines whether a wired or a wireless system is better for you. For instance, even if you own your house and are not planning on moving any time soon, if the power supply conditions available to you are not reliable, even the strongest wired systems will not be useful in the long term. Thus, stable power supply, be it in the form of a physical connection or via battery-stored power, must be taken into account before making the choice of a security camera system.

A wired system is much more likely to cost more given the initial cost of integrating the hardware with the system as well as the cost of maintaining the system in the long term. On the other hand, a wireless setup can be acquired for a significantly less cost given that you only need to buy the camera itself and either charge or replace the battery within them.

What will be Your Choice?

Now that we have seen the various factors which determine the choice between wired or Wireless Security Cameras systems, you can easily and seamlessly choose the option that ticks all the correct boxes for you. The good news is that regardless of the circumstances, a camera security system is no longer a pipe dream but can actually be scaled up or down per your personal and customised requirements, leaving no one beyond the feeling of experiencing security assured and recorded by the surveillance system! So, what will your choice be?

Reach out to our Camera Security System Professionals Today!

Now that you’re ready to go out and decide which security camera system best suits your needs, don’t hesitate in reaching out to us in case you have any more questions or concerns! We specialize in delivering efficient and optimal solutions for a wide variety of security environments in the most effective manner. Reach out and schedule a conversation with our team of security system professionals any time from our website!