Advantages and disadvantages of CCTV cameras

One of the main advantages of cameras, in general, is the ability to install them wherever. Alternatively, they can be connected directly via a mobile phone, modem, wireless adapter, or NVR. And to carry out the transmission of video images through the network in real-time, you need to connect a CCTV camera to this network. You can view the transferred image using any web browser.

The use of additional software tools and video recorders allows you to extract additional functions from your video surveillance system. Installing an IP camera CCTV is essentially giving it an IP address. After installation, you get a high-quality image compressed in well-known formats. Thus, IP CCTV cameras are the main standard for data transmission in networks, including security video surveillance systems.

Working with an analog video signal

The analog video signal goes through a digitizing process. It is performed either by the IP video camera CCTV itself or by your video server. The further recording is made on the DVR, including even a remote one. The picture is viewed from a computer or the screens of security monitors through an IP server. These functions can be implemented in any order. For example, you output an image from a personal computer using a separate IP CCTV camera and output the recorded image from any video recorder.

A network video surveillance system will cost more than an analog one. Still, the decisive factor in favor of IP systems is their functionality and a much wider range of capabilities, and we will tell you about them in more detail later.

One standard cable can transmit a digital signal, and therefore output images from hundreds of IP video cameras. You can also view images in real-time and control them through any web browser from a person remotely, being in a completely different point: from home, from the office, or any other institution, while even recording sound. 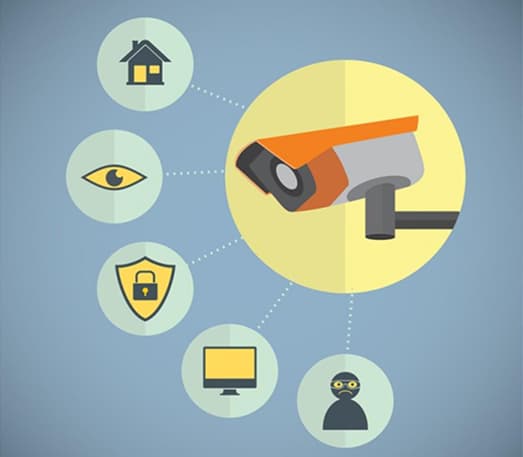 IP video surveillance is, first of all, the ability to control. And you can remotely control offices, branches, warehouses, houses, banks, hotels, entertainment venues, factories, gas stations, railway stations, and surrounding areas. Moreover, the distance between the control points and the direct location of the video surveillance systems can be completely different and, by and large, does not matter. With the help of such video surveillance systems, you can register the number of supermarket visitors (by placing cameras at the entrances and exits) and record the facts of fraud, theft, and other important incidents.

Image digitization is carried out directly in the IP camera CCTV itself, which removes the load from the central system. Thus, the number of communications is reduced, but the image quality remains high.

The use of computer and network equipment with open industry standards in IP video surveillance systems lowers the cost of the systems themselves. However, IP cameras themselves are somewhat more expensive than analog ones. It also uses standard servers for storing and recording video data, which also affects profitability.

IP video surveillance systems are easy to reconfigure or migrate. You can mount them during the construction of your facilities and then move to a new facility.

The creation of high-quality video surveillance systems of different volumes requires an individual approach and an understanding of the ultimate goals and specific tasks of the customer.